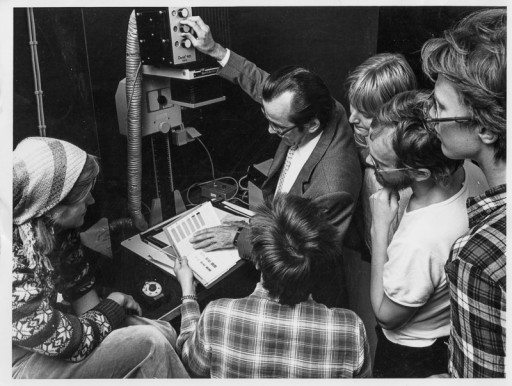 We have a long tradition of teaching photography at university level since the 1930s. The first 14 graduates received their degree during 1936-1939. Six of the graduates were women. Most of the early students worked alongside their studies either as professional photographers or as photography assistants.

University level photography education came to a halt when Finland entered the second World War in 1939. Also the demand for the education was rather limited at that time.

Photography education was re-launched in 1959 within a new department of Camera Art and Film studies. Photography and film studies were two emerging fields in a nation trying to recover from a devastating war. The approach was very practical rather than artistic or academic. The studies provided vocational training in photography and film.

In the early 1970s photography education became independent from film studies and gainedÂ its own department. During 1972-74 already 19 students were enrolled in full-time study programs. In addition, 28 photographers attended evening classes while working in photography businesses during the day.

A stronger artistic content and connections to international photography emerged when Pentti Sammallahti, Arno Rafael Minkkinen, Leena Saraste and Ismo Kajander started teaching. Emphasis on art photography grew stronger in the 1980s and 1990s and has since been the central focus of our studies.

From 1994 to 2012 Aalto offered photography education at undergraduate (BA), graduate (MA) and doctorate (Ph.D.) levels. Due to growing amount of BA education in Finland and elsewhere, our BA programme was closed in 2012. Today we offer MA and Ph.D. level degree programmes (the Doctor of Arts degree: DA). Approximately 10 applicants are accepted to both programs annually.

The doors were opened for a significant increase in international student exchange when Finland joined the European Union in 1995. A growing amount of foreign students arrive in Helsinki to join Aalto MA programmes or to study here as exchange students.